Late-onset Alzheimer's diseases (AD) contributes to > 90% of AD patients compared to < 1 % of cases in familial AD. Significant amount of funding had been put on research using transgenic models based on beta-amyloid or tau hypothesis. However, in the past decade, all clinical trials based on these research had failed. The cause of late-onset AD is unknown but likely involves environmental factors, including diets, contaminants, stress and other living habits. We believe that a non-transgenic long-term research model is required to represent the > 90% late-onset AD populations for revolutionary research on early diagnostics and new therapeutic treatment strategies.

Our model based on the brain-gut axis and prion hypothesis

We recently published two leading articles using our newly-developed late-onset AD model of the mouse through injecting soluble oligomeric beta-amyloid (1-42) into the gastrointestinal (GI) wall in 2-month-old young mouse and seeded for a year. The model makes use of misfolded beta-amyloid in the gut to trigger cascades of misfolding of beta-amyloid, and hypothesize to be translocated from the gut to the brain via neuronal, immunological and vascular pathways similar to the prion protein.
​ 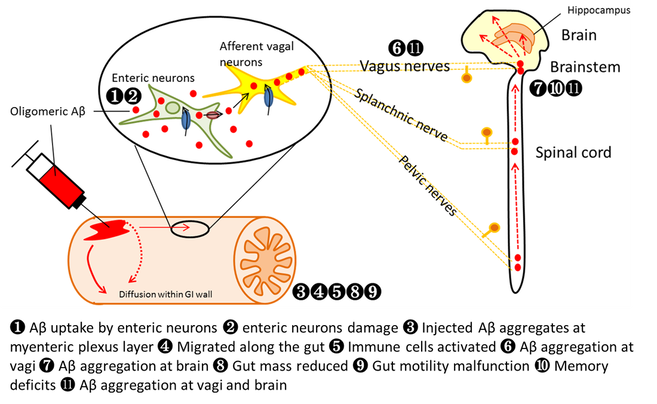