Research topic:
An Investigation into Gastric Myoelectrical Activity in Response to Drug Treatment during Ageing and in an Alzheimer's Disease Model Using the Mouse 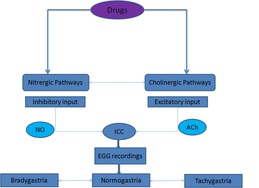 Motor disorders of the gastrointestinal (GI) tract are very common, but their underlying pathophysiology is poorly understood. Slow waves originate from the pacemaker network of the interstitial cells of Cajal (ICC). The enteric nervous system (ENS) and smooth muscle cells are known to interface with ICCs through excitatory neurotransmitters and inhibitory neuromodulators (see Figure on the left). Altered GI motility may be associated with an activation or inhibition of either or both pathways. However, little is known about the control of GI functions during ageing, or in neurodegenerative diseases.

Alzheimer’s disease (AD) is one of the common causes of dementia and affects estimated 30 million people worldwide. Although most studies have focused on the central nervous system (CNS), a loss or a decrease in neurons and/or ICC during natural ageing or during neurodegenerative diseases could result in a change in slow wave activity and motility patterns. It is imperative to understand better the pathophysiology of ageing and AD, and studying the GI tract may provide novel insights into ageing and the progression of neurodegenerative diseases. Therefore, the aims of my project are to first define the characteristics of gastric myoelectrical activity (GMA) using mouse models in order to establish criteria for analysis, for the characterisation of the effects of excitatory and inhibitory drugs. This approach would provide reference information on the neural pathways that modulate ICC function, and subsequently to identify the relationship of the neuronal control of ICC activity during ageing and disease in normal mice. Knowledge form these studies would then be applied to probe pathways in senescence-accellerated mice (SAMP8) and in transgenic mice expressing beta-amyloid.