Slow Waves in Health and Disease 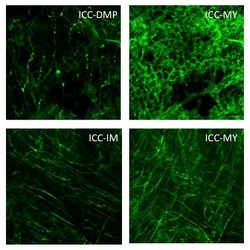 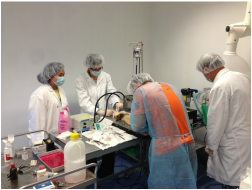 We use radiotelemetric recording techniques to record gastric slow waves in the mouse, Suncus murinus and ferret.
The approach involves the surgical implantation of radiotransmitters capable of  recording gastric myoelectric signals (sampled at 1 kHz), and  electronic filtering in several steps to remove cardiac and respiratory signals, as well as low frequency artifacts such as movement. Data can then be computed on successive sections of recordings to reveal the dominant power (DP, the highest power in recorded range); ii) the dominant frequency (DF, frequency bin with the highest power in the range); iii) the DF instability coefficient (DFIC, defined as the standard deviation of the DF divided by its mean, over a 10 min period). We can then look at the duration of effects of drug action during our experiments, and also correlate the information with changes in blood pressure and temperature (also measured telemetrically), and also with behavioural changes including emesis, modification of feeding and drinking, and locomotor activity. We are in the process of advancing our technology to be able to simultaneously record respiratory function by whole body plethysmography during the acquisition of radiotelemetric data.

Pacemaker Potentials of the Microeletrode Array 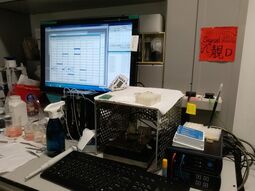 We use the microelectrode array (MEA) to record gastrointestinal (GI) slow waves using isolated stomach and intestinal tissues from the mouse, Suncus murinus and ferret. This approach allows high-throughput screening of drug effects on GI slow waves through incubating target drugs with isolated GI tissues. Our MEA systems allow simultaneously recordings from 60-electrode on a chip under a controlled temperature environment. With 60-channel data, apart from deriving the basic slow wave features, such as dominant frequency and power, signal amplitudes and periods, we can further look into the propagation velocity and activation time pattern across the chip. We are developing automatic programs using MATLAB platform for data analysis to pick up all possible slow wave features from 60-channel raw traces. We are interested in applying this approach in large-scale drug screening to build a database for machine learning on drug-induced gut dysrhythmia. Read more...